Gem Diamonds, the mining company that operates the prolific Letšeng mine in Lesotho, is riding a wave of fabulous luck. On Tuesday, May 4, officials announced the discovery of a 254-carat Type II white gem, and then on Monday, May 10, topped that news with the unveiling of a 370-carat Type II stunner.

Despite its diminutive size (about the size of Maryland), the landlocked country of Lesotho at the southern tip of Africa is a powerhouse when it comes to turning out large, Type II, top-quality stones. (Type II diamonds are extremely rare, colorless and chemically pure with no traces of nitrogen impurities.) 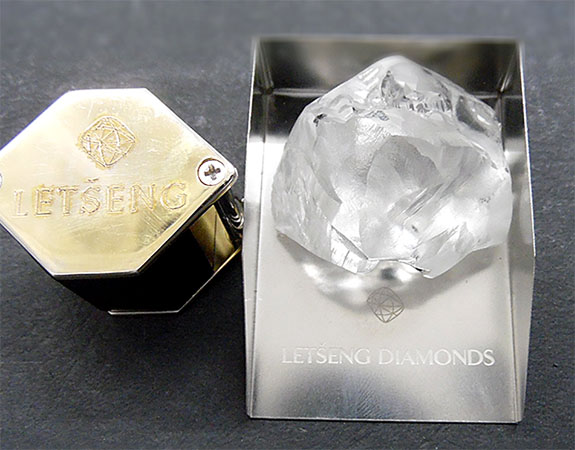 Of the largest 50 rough diamonds ever discovered, 10 have come from Letšeng, which is recognized as the highest dollar-per-carat kimberlite mine in the world.

The 370-carat find ranks 48th on Wikipedia's list of the largest rough diamonds, just ahead of two other Lesotho stones — one light brown and one white — each weighing 357 carats.

Letšeng has the distinction of being one of the world’s highest diamond mines. Its average elevation is 10,000 feet (nearly two miles) above sea level.

Since acquiring Letšeng in 2006, Gem Diamonds has unearthed more than 60 white, gem-quality diamonds weighing more than 100 carats each. The company reported that 16 100-carat-plus diamonds were recovered in the full year of 2020. In that same year, 34 individual stones sold for more than $1 million each.

The United Kingdom-based Gem Diamonds holds a 70% stake in the Letšeng mine with the government of Lesotho owning the remaining 30%. In October 2019, the partners renewed the mining lease for an additional 10 years.