Did Neanderthals Share Eagle-Talon Styling With Homo Sapiens 40,000 Years Ago?

Researchers exploring an ancient cave in Spain have found what they believe is “the last necklace made by the Neanderthals.” The carved eagle talon was dated to 39,000 years ago, which is about the time when Neanderthals crossed paths with Homo sapiens and then became extinct. 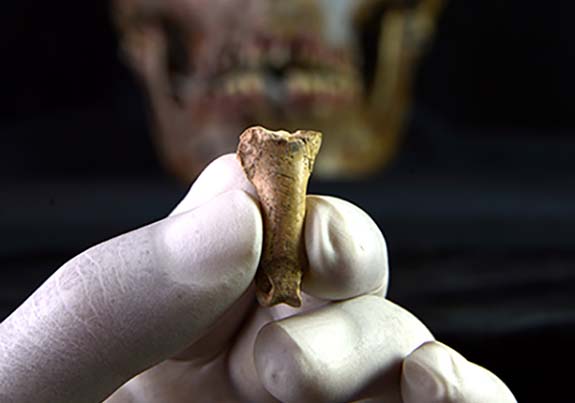 In the journal Science Advances, researcher Juan Ignacio Morales contends that the custom of wearing eagle talon jewelry could have been a cultural transmission from the Neanderthals to modern humans, who adopted this practice after reaching Europe.

Eagle talons are the oldest ornamental elements known in Europe, say the researchers, even older than the seashells Homo sapiens perforated in northern Africa. The finding suggests that the Neanderthals — who not only devised ways to trap eagles, but also fashioned their talons into jewelry — were much more intelligent and style-conscious than previously believed.

The "last necklace" eagle talon was discovered at the Foradada cave in Calafell, Spain, by a team representing the Prehistoric Studies and Research Seminar (SERP) of the University of Barcelona.

The eagle talon at Cova Foradada was found among bone remains of the Spanish Imperial Eagle (Aquila Adalberti). On the talon were tool markings that indicated the talon was fashioned to be a pendant. The ancient cave has been a valuable source of early human research since 1997.

The finding was also remarkable because it represents the first evidence that Neanderthals used eagle talons as necklace pendants on the Iberian Peninsula. It was previously believed that this practice was limited to the Neanderthals that inhabited Southern Europe.

The researchers believe the eagle talon jewelry was created by the last group of Neanderthals known as the châtelperronian culture. Scientists say that Neanderthals appeared in Eurasia between 200,000 and 250,000 years ago and died out about 40,000 years ago.