The original legal document that set the wheels in motion for the cutting of the 3,106-carat Cullinan — the world's largest rough diamond — will be offered to the highest bidder at Bonhams London on April 30. The auction house is estimating that the historic document will sell in the modest price range of $2,606 to $3,910.

Signed on January 29, 1908, the nine-page agreement between the representatives of King Edward VII and M.J. Levy & Nephews mapped out the company's responsibilities during the cutting process. London-based broker M.J Levy & Nephews arranged for the diamond to be cut and polished by the renowned Asscher Company in Amsterdam, which had successfully cut the previously largest known diamond, the 995.2-carat Excelsior, five years earlier.

Included within the M.J. Levy & Nephews' document is a "principal agreement" between the Crown Nominees and the Asscher Company. That agreement outlined the cutting process and detailed how the Asscher Company would be compensated. Interestingly, the company was to be paid in "chippings" (diamond remnants) or the cash equivalent.

In 1905, the astonishing discovery of the Cullinan diamond was made at the Premier Mine No. 2 near Pretoria, South Africa. The massive stone was named after the chairman of the mine, Thomas (later Sir Thomas) Cullinan.

Having initially failed to find a buyer, the mine owners eventually sold the Cullinan to the South African Transvaal Colony government in 1907 for £150,000, which then presented it to King Edward VII on his 66th birthday as a symbol of South Africa's loyalty to the Crown.

The King was advised that the Cullinan needed to be cleaved into smaller stones before it could be cut and polished. This was enormously complex and involved significant risk for a stone valued in 1908 at £250,000, more than £25 million ($32.6 million) today. The King hired M.J. Levy & Nephews to oversee the operation. At the time, insurance was taken out "against loss, theft and damage of every kind, excepting damage caused by cutting." 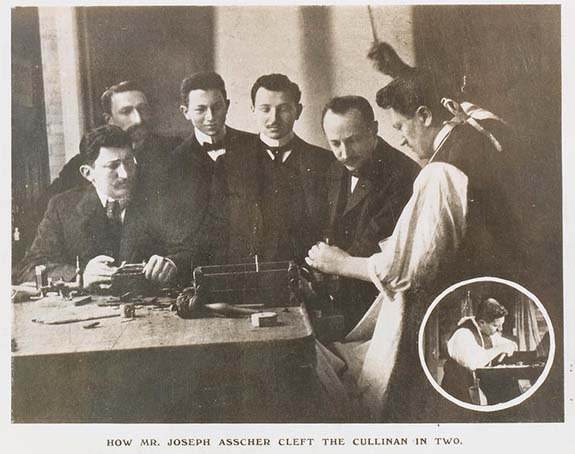 After an extensive period of studying the stone, Joseph Asscher started the cutting process by creating an incision in the diamond of approximately 6.5mm deep. It has been reported that Asscher broke his tool when he initially struck the stone. A week later, after developing stronger tools, Asscher successfully cleaved the the Cullinan into two principal parts, weighing 1,977 carats and 1,040 carats.

It's been reported that the failed first attempt was done under the watch of a notable audience, while the second attempt was accomplished with nobody in the room, except for a Notary Public. Legend has it that Asscher struck the diamond so hard that he fainted after it split. 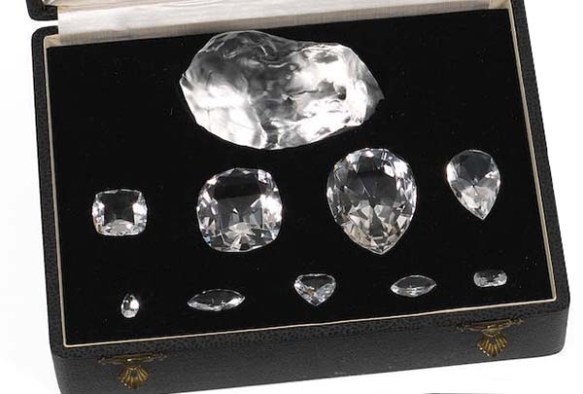 Over the following months, these diamonds were further polished and cut to create nine principal stones, 96 smaller diamonds and a quantity of polished "ends."

Cullinan I and II are part of the collection of Crown Jewels and the remaining seven principal diamonds are in the collection of Queen Elizabeth II, after Her Majesty inherited them from her grandmother, Queen Mary, in 1953.

The Bonhams lot includes the M.J. Levy & Nephews agreement as well as a replica of the Cullinan in its original rough crystal form and two replica sets of the nine principal diamonds from the uncut diamond.