N.H. Granny Gives Up Her Own Engagement Ring So Young Waiter Can Propose to His Girlfriend

A New Hampshire granny has earned internet stardom after generously gifting her own diamond engagement ring to a young waiter so he could propose to his girlfriend.

"It was just the right thing to do," Concord native Sharon Heinemann told local TV station WMUR. "I just did it, you know. He loved her, and he didn’t have a ring."

Last week, Heinemann and her two sisters ventured to Boston to see rock star Pink in concert. Before the show, they stopped in at Legal Sea Foods and struck up a conversation with their waiter, Mattheus Gomes.

Sister Ginny Krowe explained: "Mattheus, a very handsome gentleman, waited on us and served us, and I got to chatting with him and asked him if he had a girlfriend."

Gomes told the ladies that he was deeply in love with his girlfriend, Maria, who also worked at the restaurant.

He also revealed that he was planning a proposal, but he couldn't afford a ring.

Without hesitation Heinemann plucked the engagement ring from her finger and handed it to Gomes.

The waiter called for his girlfriend and got down on one knee.

Krowe recounted the proposal: “He says, ‘Maria, I love you. Will you marry me?' She was crying. She says, ‘Yes, yes, Mattheus.'”

Later on, Maria got to meet the woman who helped make her dreams come true. The two ladies posed with their rings — Maria proudly wearing her new diamond engagement ring and Sharon wearing her diamond wedding band.

Mattheus and Maria have already invited the three New Hampshire sisters to their wedding. When a reporter for WMUR asked who will be attending, all three enthusiastically raised their hands. 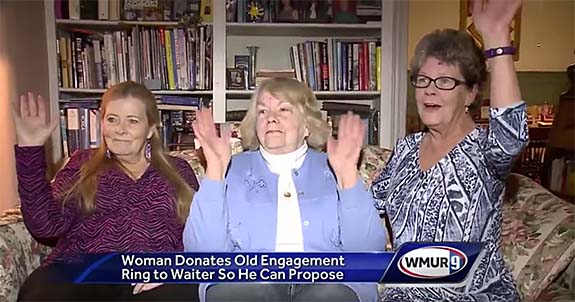 Legal Sea Foods made the day even more special by picking up the lunch tab for the sisters.

When asked how she felt about giving up her engagement ring to help the young couple, Heinemann said she felt "immensely happy. It made me feel good."

Heinemann and her sisters are now internet stars, as their story has been picked up by top news outlets, such as Yahoo!, The Sun, The Daily Mail and ABC.